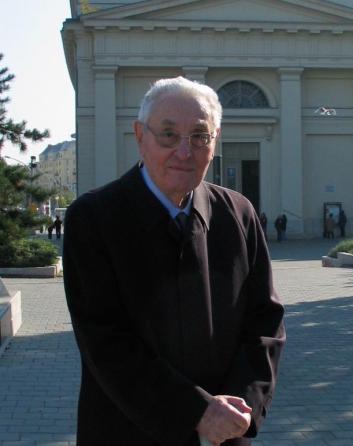 On Tuesday, 7 November, George Pósfay died at the age of 96.
He had been an active member of our congregation for decades and lived an all-around remarkable life. He was a Hungarian Lutheran pastor who ministered in several countries and served for many years on staff with the Lutheran World Federation. He was also a loving husband and father and a friend and mentor to many.

George’s funeral was held at the ELCG on Saturday, 18 November – giving thanks for George’s life and commending him to God’s grace. Images and recordings available here or below.

In the above photograph, George is standing in front of Deák téri evangélikus templom, the church in Budapest where he was baptized and ordained and where his ashes will be interred.

Rev. Dr George Pósfay was born on 18 June 1921 in Budapest. He was ordained in the Lutheran Church of Hungary in 1943, served congregations in Hungary, the United States and Venezuela, and was closely linked to the LWF from its beginnings 70 years ago.

Rev. Dr Pósfay attended the 1947 Assembly in Lund, where the LWF was constituted, and continued deepening his relationship with the global Lutheran communion over many years, serving in a variety of capacities. In 1971 Rev. Dr Pósfay, who had served as a pastor and church leader in Venezuela since 1952, was appointed the LWF Latin America secretary in the Department of Church Cooperation. In 1980 he was named secretary for Research and Planning in the same department, a post he held until his retirement in 1986.

Following retirement, Rev. Dr Pósfay volunteered as the director of the Hungarian-language radio programming for the European Radio Mission, sponsored by the Norwegian Mission. He also served as honorary supply pastor at the Hungarian Protestant congregation of Geneva and Lausanne, and was active in the Evangelical Lutheran Church of Geneva.

The pastor and historian was educated in Hungary at Elizabeth University and the Evangelical Lutheran Seminary in Sopron, doing post-graduate studies at universities in Uppsala and Lund, Sweden, and the United States, where he attended Augustana College and Seminary in Rock Island, Illinois, and obtained a master’s degree in history at Western University in Cleveland, Ohio. In 1991 he received a doctorate in theology at the Lutheran Theological University in Budapest.

In his letter to the family, LWF General Secretary Rev. Dr Martin Junge said Rev. Pósfay lived out his faith through his dedicated work for the Lutheran family. “We give thanks for his dedicated life, and paraphrasing his own words in his farewell speech: ‘We are grateful to God that George could be part of the ecumenical movement and work with us so that God’s glory be manifested…’

“As we give thanks for Rev. George Pósfay’s life, we pray that when meeting God face to face, he hears the words, ‘Well done, good and faithful servant!’” Dr Junge’s letter concluded. [Based on LWF news release, 17 Nov 2017]